Oh what a tangled, slippery-sloped, viper-infested, self-sabotaging path we fiction writers tread. What seems so simple -- because we read excellent stories all the time, and they really do seem, well, if not simple, then at least clear and clean, and therefore not beyond our means -- turns out to be anything but.

The blank page both calls to us and mocks us. And so we fill it up with what we have to offer, arising from the pool of what we know, fueled by dreams we dare not utter aloud... sometimes soured by what, either in ignorance or arrogance or simple haste, we've chosen to ignore. Meanwhile, in spite of all the books and workshops and websites and analogy-loving writing gurus out there, we cling to the limiting belief that there are no "rules." The mere mention of that word causes you to rebel, even conclude that principles and standards are really "rules" with polite sensibilities, and from there we decide that we can write our stories any way we please.

Because this is art, damn it.

Often we don't find that out that what we have to offer isn't good enough until the rejection letter arrives. Or the critique group pounces like Simon Cowell on a bad day. Or when a story coach doesn't tell you what you want to hear. As one of the latter, my job involves telling writers -- frequently -- that their story is coming up short, and why. That the wheels fell off, very often at the starting gate. It's the "why" part that allows me to sleep at night, because I've been on my share of the sharp pokes this business delivers. But like a doctor giving a screaming kid a vaccination shot, I take solace in the hope that once the sting subsides the writer will see the pit into which they are about to tumble.

And you can't write your way out of the pit. No, the pit requires avoidance rather than rescue.

The Trouble with Craft

Craft -- the mechanics and architecture and sweat of putting a story together -- is complex, if nothing else than for its sheer immensity. It's anything but simple. Even in those stories that inspire us, bestsellers and favorite authors and even the classics, we're witnessing the symmetry and fluid power of simplicity on the other side -- beyond -- complexity.

In my work I've sought to put fences around it all, create labels and levels and subsets of supersets and connect those dots in ways that facilitate navigation on that aforementioned path. (My friend Randy Ingermanson is nodding now, as he's doing the same thing, and very effectively, with his Snowflake story development model.) Six core competencies, six realms of story physics, and about five dozen subordinated corners of the craft aligned under those twelve flags.

Trouble is -- just like in love and careers and gambling -- you can get them all technically right... and your story can still fall flat. And that's the thing -- the holy grail of "things" we need to understand -- that separates craft from art. Unpublished from published. Frustrating from rewarding. So without minimizing any of the myriad corners and nuances of craft -- indeed, they remain eternal, consistent and the non-negotiable ante-in -- allow me to simplify. To break it down into three buckets, three qualities, three goals, that any successful story will embody to some extent. Three things about your story... things that readers will, upon finishing your story, notice.

Three essences to shoot for. Three qualities to evaluate about your story plan, and then your story execution. Three things to grade yourself on.

If at least one of those grades isn't an "A," then you're not done.

One of the reasons I ask my clients to pitch me their concept and their First Plot Point (and why we ask for a synopsis with those first 20 pages for manuscript consults at the WW conference) is that, almost without exception, I can assess two things from the answer: the writer's understanding of these three critical elements, and the potential for the story to deliver them, in whatever combination, with sufficient power and artfulness. Here they are. No surprises here. But be honest, have you really evaluated your story on these things, regarded alone as criteria? Have you asked yourself what your strategy will be to optimize one or more of these things? Now you can.

In no particular order, because each stands alone as a potential windfall:

Intrigue - A story is often a proposition, a puzzle, a problem and a paradox. When you (the reader) find yourself hooked because you just have to know what happens... or whodunnit... or what the underlying answers are... then you've intrigued your reader. It may or may not have an emotional component to it -- mysteries, for example, are usually more intellectual than emotional, they're intriguing because the clues will always lead somewhere, and we want to know where, even see if we can get their first.

Mysteries, as a genre, are almost entirely dependent upon reader intrigue. Not necessary "dramatic intrigue" within the story itself, but rather, the degree to which a reader is "intrigued" with the questions the story is asking.

But this kind of intrigue isn't limited to mysteries. Sometimes the intrigue is delivered by the writing itself. A story without all that must depth or challenge can be a lot of fun, simply because the writer is funny. Or scary. Or poetic. Or brilliant on some level that lends the otherwise mundane a certain relevance and resonance. Make no mistake, this, at is core, is a form of intrigue.

Emotional Resonance - When a story moves you, which so many great stories do, it's because we feel it. It makes us cry. Laugh. It makes us angry. It frightens. It's nostalgic. Important.

Les Miserables isn't the classic it is -- book, stage and now screen -- because we must find out "what happens. No, it works because it makes use cry. John Irving's Cider House Rules is a modern classic because it pushes buttons, makes us choose, forces us to behold the consequences of our choices. Same with The Davinci Code, another modest success. Every love story, every story about injustice and pain and children and reuniting with families and forgiveness -- name your theme -- is dipping into the well of emotional resonance for its power.

Vicarious Experience - reader, meet Harry Potter. Go with him on an adventure to a place you'll never experience otherwise. Or Hans Solo. Or James Bond. Or Sherlock Holmes or Merlin or some alien with an agenda. The juice of these stories isn't the dramatic question or the plucking of your heart strings as much as the ride itself. The places you'll go, the things you'll see, the characters you'll encounter, the things you'll see and do.

Of course, emotional experience can be a ride, as well -- a story about falling in love, or getting fired, or winning the lottery -- and when that happens you've been given an E-ticket on the Slice of Life attraction. These stories strike two of these Trifecta chords by making us feel the experience of falling in love, or feeling loss or simply walking a mile in shoes that seem compellingly familiar.

The common factor here is this: something compelling about the story.

That may seem obvious. But the truth is, and sadly so, it doesn’t translate to pervasive among yet-to-be-published stories.

This sought-after compelling nature resides in various realms of the human experience – intellectually, emotionally, or on some other level (usually the result of a combination of these three gold standards). An allure that resides beyond the tricky or original or otherwise "interesting" nature of its concept.

Your concept, however tricky or original or interesting, isn't compelling until it lands on one or more of those three powerful forces: intrigue... emotional resonance... vicarious experience. A story about aging backwards, about going to another planet, about a secret code... about something conceptual... isn't enough.

Until you juice it with some combination of the Trifecta elements. Until that happens, that's all it is: a concept. And in this business, concepts are commodities.

Which is why a "compelling premise" is only one of the six realms of story physics.

It functions as the stage, the landscape, upon which these truly powerful essences can emerge to transform a story into magic.

Or better stated... into art.

When these three essences become the goal, the criteria of your concept and your craft, then you have a real shot. Because now you're risen above a bevy of concepts -- rehashed, reheated and retreaded -- crowding the inboxes of agents and publishers out there.

They're looking for the next great story. And intrinsic to that definition you'll find The Trifecta... three compelling story essences that are waiting to make your story work.

And when it does, it really is art, after all. 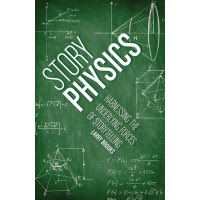 Larry Brooks is a novelist and the author of two bestselling writing books, both from Writers Digest: "Story Physics: Harnessing the Underlying Forces of Storytelling" (2013), and “Story Engineering: Mastering the Six Core Competencies of Successful Storytelling” (2011 ). His latest novel, "Deadly Faux," will be released by Turner Publishing in October 2013, as well as his five-title backlist, which includes a USA Today Bestseller ("Darkness Bound," 2000) and a Publishers Weekly "Best Books of 2004" ("Bait and Switch," 2004). He is also the creator of Storyfix.com, named Writers Digest Magazine’s “101 Best Writing Websites” for the past two years.
Posted by Unknown at 11:53 AM